I'm Having More Fun Than You (Paperback) 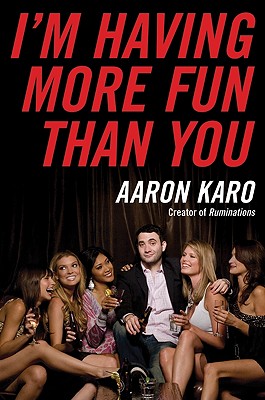 I'm Having More Fun Than You (Paperback)


Not On Our Shelves—Ships in 1-5 Days
From Aaron Karo, stand-up comic and acclaimed author of Ruminations on College Life and Ruminations on Twentysomething Life, comes I’m Having More Fun Than You, an irreverent exploration of why guys embrace bachelorhood and love flying solo in their twenties and thirties.

Aaron Karo is the author of Ruminations on College Life and Ruminations on Twentysomething Life, and has been writing his celebrated email column Ruminations since 1997. Also a nationally headlining comedian, Karo has performed on The Late Late Show with Craig Ferguson, and Comedy Central Records released his latest stand-up album, Just Go Talk to Her, in 2008. Originally from New York, Karo lives in Los Angeles, where he runs Ruminations.com, the web site he founded to make sure no one gets anything done at work.

“Study the book I’m Having More Fun Than You by the hilarious Aaron Karo. He’ll explain to you exactly how guys think.” — E. Jean Carroll, Elle

“Comedian Aaron Karo’s new book is a seriously funny ode to single life. He explores the mating dance between single men and women with hysterical insight and brutal honesty.” — BettyConfidential.com

“A cock-sure celebration of being single, filled with Karo’s ultra-male observations from being happily alone and tons of tips on how to stay unhitched.” — Punchline

Karo discusses the perks of being single when everyone else you know is getting hitched. Whether your friends are getting married or just act like it with their long distance boyfriend of 4 years, you will relate, laugh, and maybe even pee a little.” — CollegeCandy.com

“Aaron Karo never apologizes for being single; in fact, he encourages it.” — AskMen.com

“An ode to the beer-drinking, chick-banging perennial bachelor.” — TheFrisky.com

“A tribute to single guys in their late 20s and early 30s who can’t stomach the idea of being in a serious relationship, and who ponder their next walk of shame more than a walk down the aisle.” — A.M. New York

“Karo’s third book details his philosophies, stories, and tips as a 30-year-old single guy still heading to bars and picking up women (or “kicking game”) as his contemporaries settle down.” — BroBible.com

“A celebration of singlehood through anecdotes, observations and a few tips along the way.” — LAist.com

“All about how great it is to be single and unattached.” — Comedy Central Insider