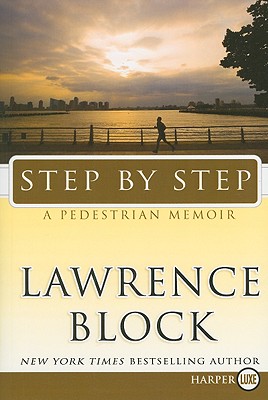 Before Lawrence Block was the author of bestselling novels featuring unforgettable characters such as hit man Keller, private investigator Matthew Scudder, burglar Bernie Rhodenbarr, and time traveler Evan Tanner, he was a walker. As a child he walked home from school, as a college student he walked until he was able to buy his first car, and, as an adult, he ran marathons until he discovered the sport of racewalking.

Through the lens of his walking adventures—in 24-hour races, on a pilgrimage through Spain, and just about everywhere you can imagine—Block shares his heartwarming personal story about life's trials and tribulations, discomforts and successes, that truly lets readers walk a mile in the master of mystery's shoes.

Lawrence Block is one of the most widely recognized names in the mystery genre. He has been named a Grand Master of the Mystery Writers of America and is a four-time winner of the prestigious Edgar and Shamus Awards, as well as a recipient of prizes in France, Germany, and Japan. He received the Diamond Dagger from the British Crime Writers' Association—only the third American to be given this award. He is a prolific author, having written more than fifty books and numerous short stories, and is a devoted New Yorker and an enthusiastic global traveler.

“Block’s memoir is a worthy addition to his impressive list of accomplishments.” — Buffalo News

“Block’s exercise of memory is a delight compounded of rumination and amusement.” — Booklist

“Block knows that character and ambience are the heart and soul of crime fiction, but unlike so many of his brethren, he also maintaines a healthy respect for plot.” — Booklist

“One of the best writers now working the beat, Lawrence Block has done something new and remarkable with the private eye novel.” — The Wall Street Journal

“One of the most accomplished writers of mystery and suspense fiction in America.” — Kansas City Star

“A superior storyteller. . . . Block has an awareness of the pain and pleasure of living. It is a gift not all authors have.” — San Antonio Express-News