Law of the Jungle: The Hunt for Colombian Guerrillas, American Hostages, and Buried Treasure (Paperback) 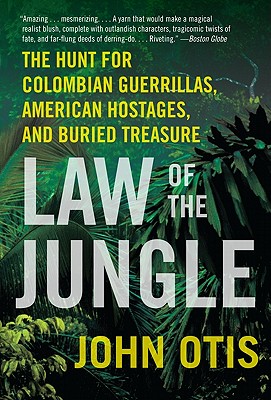 Law of the Jungle: The Hunt for Colombian Guerrillas, American Hostages, and Buried Treasure (Paperback)

Law of the Jungle by John Otis is a wild and riveting true story of kidnapping and drug trafficking in the jungles of South America. Written by a 20-year veteran reporter based in Colombia—the only reporter qualified to tell the tale—this incredible account of “The Hunt for Colombian Guerrillas, American Hostages, and Buried Treasure” tells the untold flip side of the story chronicled in the New York Times bestseller Out of Captivity. An amazing surreal-but-true adventure in the tradition of Mark Bowden’s Killing Pablo and Blackhawk Down, Law of the Jungle is, at once, heroic, tragic, and bizarre, placing the Colombian hostage story in its full and magnificently strange context.

John Otis has worked as a reporter in Latin America for more than two decades, and served for eight years as South America Bureau Chief for the Houston Chronicle. He now reports from Colombia for Time magazine, GlobalPost, and the BBC/PRI radio program The World, and he lives in Bogotá.

“Amazing...Mesmerizing....[John] Otis has assembled a yarn that would make a magical realist blush, complete with outlandish characters, tragicomic twists of fate, and far-flung deeds of derring-do.... Riveting.” — Boston Globe

“Law of the Jungle is a well-reported, highly informative account of the chase, which was undertaken largely by the Colombian army....[A] thriller-opera of a story....Otis’s story rises beyond ordinary reporting: He manages to condense recent Colombian history into a clear, digestible narrative.” — Washington Post

“Gripping and funny...[Otis] tells an amazing story in his first book....Marc Gonsalves, Thomas Howes and Keith Stansell were finally freed during the summer of 2008, and Otis tells their story in the sort of rich detail you’d expect of an experienced print journalist.” — Minneapolis Star Tribune

“With its Conradian atmosphere of jungle-induced madness and an immediacy stemming from interviews with many of the participants, this will engage all...” — Booklist

“An impossible-to-put-down read with as many twists and turns as a summer blockbuster.... Otis, a journalist who has worked in Latin America for more than 20 years, skillfully weaves this incredible tale of attempted—and eventually successful—rescue by Colombian soldiers....Fascinating.” — Very Short List

“Has the feel of a John Huston movie, with its mix of tragedy, intrigue, black comedy and, ultimately, heroism....fascinating. — BookPage