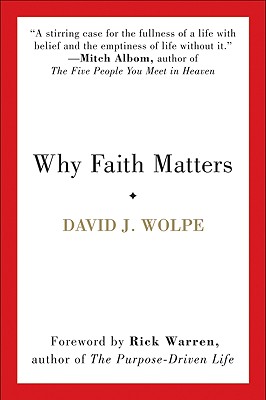 In Why Faith Matters, Rabbi David J. Wolpe blends the powerful personal story of his struggles with his own faith with a poignant response to the new atheists that reveals just how important faith in modern society. With a foreword by Rick Warren, New York Times bestselling author of The Purpose Driven Life, Why Faith Matters is an articulate and much-needed nondenominational defense of established religion in America by the man Newsweek magazine named the #1 Pulpit Rabbi in America.

Named the #1 Pulpit Rabbi in America (as reported in Newsweek), David J. Wolpe is the rabbi of Sinai Temple in Los Angeles and a teacher of modern Jewish religious thought at UCLA. Rabbi Wolpe writes for many publications, including The Jewish Week, Jerusalem Post, Los Angeles Times, and Beliefnet.com. He has appeared as a commentator on CNN and CBS This Morning and has been featured on the History Channel's Mysteries of the Bible. He is the author of six previous books, including the national bestseller Making Loss Matter: Creating Meaning in Difficult Times.