In the First Circle: The First Uncensored Edition (Paperback) 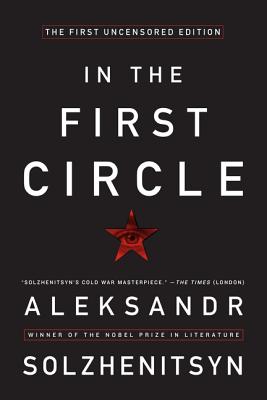 In the First Circle: The First Uncensored Edition (Paperback)

By Aleksandr I. Solzhenitsyn

“The arrival of the uncensored text of this great novel is long overdue. A complex meditation on fear, tyranny, and the never-ceasing efforts of governments to control speech, The First Circle transcends the specific and illuminating the universal. This work is testimony that there are bulwarks against the complicity of forgetting.”
— Shawn Wathen, Chapter One Book Store, Hamilton, MT

The thrilling Cold War masterwork by the Nobel Prize-winning author of The Gulag Archipelago, published in full for the first time

Moscow, Christmas Eve, 1949.The Soviet secret police intercept a call made to the American embassy by a Russian diplomat who promises to deliver secrets about the nascent Soviet Atomic Bomb program. On that same day, a brilliant mathematician is locked away inside a Moscow prison that houses the country's brightest minds. He and his fellow prisoners are charged with using their abilities to sleuth out the caller's identity, and they must choose whether to aid Joseph Stalin's repressive state—or refuse and accept transfer to the Siberian Gulag camps . . . and almost certain death.

First written between 1955 and 1958, In the First Circle is Solzhenitsyn's fiction masterpiece. In order to pass through Soviet censors, many essential scenes—including nine full chapters—were cut or altered before it was published in a hastily translated English edition in 1968. Now with the help of the author's most trusted translator, Harry T. Willetts, here for the first time is the complete, definitive English edition of Solzhenitsyn's powerful and magnificent classic.

After serving as a decorated captain in the Soviet Army during World War II, Aleksandr I. Solzhenitsyn (1918-2008) was sentenced to prison for eight years for criticizing Stalin and the Soviet government in private letters. Solzhenitsyn vaulted from unknown schoolteacher to internationally famous writer in 1962 with the publication of his novella One Day in the Life of Ivan Denisovich; he was awarded the Nobel Prize in Literature in 1968. The writer's increasingly vocal opposition to the regime resulted in another arrest, a charge of treason, and expulsion from the USSR in 1974, the year The Gulag Archipelago, his epic history of the Soviet prison system, first appeared in the West. For eighteen years, he and his family lived in Vermont. In 1994 he returned to Russia. Aleksandr Solzhenitsyn died at his home in Moscow in 2008.

“The new edition of Solzhenitsyn’s epic novel, In the First Circle captures better than any other work of fiction the quintessence of communist rule at its Stalinist peak: all-pervasive, paranoid, oppressive, incompetent, lethal. ... The longer text is deeper and darker.” — The Economist

“The appearance in English of this new version of Aleksandr Solzhenitsyn’s best novel is an exciting literary event. . . . A great and important book, whose qualities are finally fully available to English-speaking readers.” — Washington Post