A Golden Age: A Novel (Paperback) 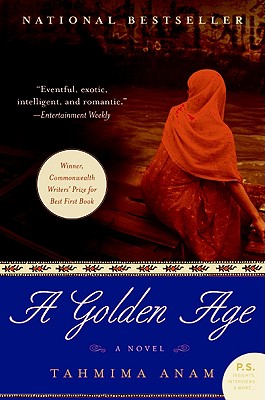 A Golden Age: A Novel (Paperback)

“A Golden Age is both a personal and a political history. The revolution of 1971 in East Pakistan (now Bangladesh) is seen through the lens of family relationships, where choices that are sometimes perceived as abstract in the history books have immediate and heart-stopping consequences for individuals. Anam's writing is precise and her characters complex. The culture and the region are depicted in rich detail, and the plot builds to an ending that is both perfectly logical in the context of the novel and breathtaking in its daring. What more can a reader ask?”
— Lilla Weinberger, Readers' Books, Sonoma, CA

“Spellbinding . . . . Anam has written a story about powerful events. But it is her descriptions of the small, unheralded moments . . . that truly touch the heart.” —San Francisco Chronicle

Tahmima Anam’s deeply moving debut novel about a mother’s all-consuming love for her two children, set against the backdrop of war and terror, has led critics to comparisons with The English Patient and A Thousand Splendid Suns.

Rehana Haque, a young widow transplanted to the city of Dhaka in East Pakistan, is fiercely devoted to her adolescent children, Maya and Sohail. Both become fervent nationalists in the violent political turmoil which, in 1971, transforms a brutal Pakistani civil war into a fight to the death for Bangladeshi independence. Fair-minded and intensely protective of her family, but not at all political, Rehana is sucked into the conflict in spite of herself.

A story of passion and revolution, of family, friendship and unexpected heroism, A Golden Age depicts the chaos of an era and the choices everyone—from student protesters to the country’s leaders, and rickshaw wallahs to the army’s soldiers—must make. Rehana herself will face a cruel dilemma; the choice she makes is at once heartbreaking and true to the character we have come to love and respect.

Tahmima Anam is an anthropologist and a novelist. Her debut novel, A Golden Age, won the 2008 Commonwealth Writers Prize for Best First Book. In 2013, she was named one of Granta’s Best Young British Novelists. She is a contributing opinion writer for the New York Times and was a judge for the 2016 International Man Booker Prize. Born in Dhaka, Bangladesh, she was educated at Mount Holyoke College and Harvard University, and now lives in Hackney, East London.

“In this striking debut novel . . . Anam deftly weaves the personal and the political, giving the terrors of war spare, powerful treatment while lyrically depicting the way in which the struggle for freedom allows Rehana to discover both her strength and her heart.” — The New Yorker

“A vibrant first novel…A story that is both intimately close to the family and large enough to encompass a revolution.” — Denver Post

“Told with great skill and urgency…Spellbinding in its sense of quiet foreboding…Anam has written a story about powerful events. But it is her descriptions of the small, unheralded moments, the ones slipping effortlessly between the interstices of major conflagrations, which truly touch the heart.” — San Francisco Chronicle

“A generous act of creative empathy…A warmhearted novel…Anam has crafted a compelling tale steeped in her native land’s diverse culture…She does not flinch from complexity and horror of a more intimate nature than the details of atrocities…The closing pages achieve real tragic stature.” — Washington Post Book World

“Once the war takes hold, Anam finds her subject in Rehana’s fierce love for her children, in the story of what she is willing to do to keep them alive…History itself becomes an animating force…The second half of the novel acquires a taut, electric air, and I turned its pages greedily as it if were a thriller.” — New York Times Book Review

“A GOLDEN AGE has everything an epic should have—families torn apart by civil war, dreadful choices and betrayals, stolen moments of beauty. . . . By painting that portrait of maternal love, both powerful and overpowering, against the back drop of a young generation’s love for a new country, Anam gives her story an extra layer of poignancy.” — San Jose Mercury News

“Tahmima Anam’s startlingly accomplished and gripping novel describes not only the tumult of a great historical event…but also the small but heroic struggles of individuals living in the shadow of revolution and war.” — Pankaj Mishra

“Written with marvelous control and understatement, this first novel impressed me with its maturity.” — Women's Review of Books

“[A] wonderful addition to the growing list of novels that seek, in some way, to help us understand the history and people of South Asia.” — USA Today

“Moving…Full of beauty…Both a riveting tale and a lament for the atrocities the people suffered during Pakistan’s invasion in 1971 …The novel just keeps getting stronger as it progresses…building to a doozy of an ending.” — Christian Science Monitor

“An illumination on how far a woman will go to protect her children’s bodies and souls . . . Anam reminds us most forcefully that a mother’s love for her child is the most powerful and frightening weapon there is.” — Minneapolis Star Tribune

“Anam’s story gains momentum as its characters take shape…Readers will feel the depth of this nation’s crisis through its people, and the conclusion delivers a surprising blow.” — Rocky Mountain News