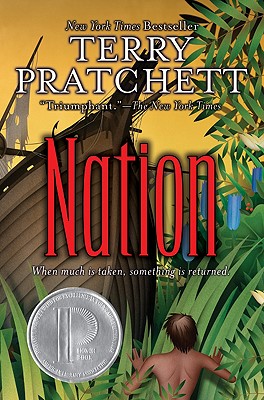 When a giant wave destroys his village, Mau is the only one left. Daphne—a traveler from the other side of the globe—is the sole survivor of a shipwreck. Separated by language and customs, the two are united by catastrophe. Slowly, they are joined by other refugees. And as they struggle to protect the small band, Mau and Daphne defy ancestral spirits, challenge death himself, and uncover a long-hidden secret that literally turns the world upside down.

“Pratchett’s examination of questions about religious belief, the nature of culture and what it means to be human [...] is a terrific, thought-provoking book.” — Washington Post Book World

“A searching exploration of good and evil, fate and free will, both as broad and as deep as anything this brilliant author has produced so far. ” — Kirkus Reviews (starred review)

“Neatly balancing the somber and the wildly humorous in a riveting tale of discovery, Pratchett shows himself at the height of his powers.” — Publishers Weekly (starred review)

“It is hard to imagine a reader who won’t feel welcomed into this nation.” — Horn Book (starred review)

“A classic survival tale that offers laughs and much to mull over, this is a wonderfully entertaining novel.” (starred review) — KLIATT