Violent Politics: A History of Insurgency, Terrorism, and Guerrilla War, from the American Revolution to Iraq (Paperback) 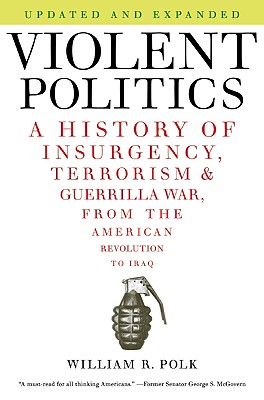 Violent Politics: A History of Insurgency, Terrorism, and Guerrilla War, from the American Revolution to Iraq (Paperback)

Guerrilla warfare is not just the tool of modern-day terrorists in the Middle East. Its roots stretch back to our very own revolution.

In Violent Politics, William R. Polk takes us on a concise, brilliant tour of insurgencies throughout history, beginning with America's own struggle for independence. Continuing on, Polk explores the role of insurgency in other notable conflicts—including the Spanish guerrilla war against Napoleon, the Irish struggle for independence, the Algerian War of National Independence, and Vietnam—eventually landing at the ongoing campaigns in Afghanistan and Iraq, where the lessons of this history are needed more than ever.

William R. Polk taught Middle Eastern history and politics and Arabic at Harvard until 1961, when he became a member of the Policy Planning Council of the U.S. Department of State. In 1965, he became Professor of History at the University of Chicago, where he established the Center for Middle Eastern Studies. His many books include The Birth of America and Understanding Iraq.