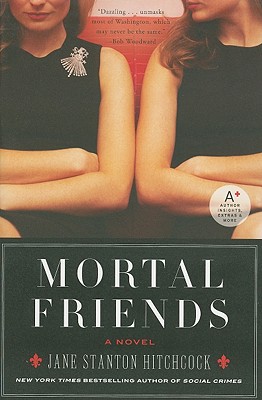 “Murder, blackmail, and betrayal, all set against the glittering backdrop of Washington society.”
—The Today Show

No one knows the world of high society better that New York Times bestselling author Jane Stanton Hitchcock—and no one captures its behind-the-scenes scandals and secrets better. In Mortal Friends, the Edgar® Award-nominated author of Trick of the Eye and Social Crimes offers readers a comedy of manners and murders which Barbara Goldsmith describes as a “dizzying dash through the heights of Washington society, a high velocity novel with more twists than a corkscrew.” Dominick Dunne said, “I had a great weekend with this book.” Find out how the other half live—and die—by spending some quality time with Mortal Friends.

Jane Stanton Hitchcock is the New York Times bestselling author of Mortal Friends, The Witches' Hammer, Social Crimes, and Trick of the Eye, as well as several plays. She lives with her husband, syndicated foreign-affairs columnist Jim Hoagland, in New York City and Washington, D.C.

“A dazzling, wicked murder mystery that unmasks most of Washington, which may never be the same.” — Bob Woodward