Gilded Lily: Lily Safra: The Making of One of the World's Wealthiest Widows (Paperback) 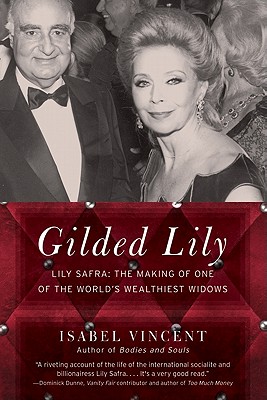 Gilded Lily: Lily Safra: The Making of One of the World's Wealthiest Widows (Paperback)

“Isabel Vincent has written a riveting account of the life of the international socialite and billionairess Lily Safra, allegedly the third richest woman in the world.... It’s a very good read.” — Dominick Dunne

In this absorbing biography of Brazilian-born philanthropist and socialite Lily Safra—the first ever published—acclaimed investigative journalist Isabel Vincent (Bodies and Souls) delves beneath the intrigue surrounding one of the world’s richest women. From her humble beginnings in a Rio de Janeiro shantytown to the tragic death of her fourth husband, legendary billionaire banker Edmond Safra, in an arsonist’s fire in their Monte Carlo penthouse, Gilded Lily combines all the elements of compelling fiction in an absolutely enthralling account.

Isabel Vincent is an award-winning investigative journalist currently working for the New York Post. She is the author of Bodies and Souls: The Tragic Plight of Three Jewish Women Forced into Prostitution in the Americas; Hitler's Silent Partners: Swiss Banks, Nazi Gold, and the Pursuit of Justice; and See No Evil: The Strange Case of Christine Lamont and David Spencer. Her work has appeared in the New Yorker, the New York Times "T" Magazine, the Independent, Marie Claire, L'Officiel (Paris), and many other international publications. She lives in New York City.