The Plays of Anton Chekhov (Paperback) 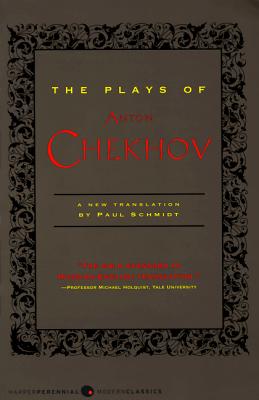 The Plays of Anton Chekhov (Paperback)

These critically hailed translations of The Seagull, Uncle Vanya, The Three Sisters and the other Chekhov plays are the only ones in English by a Russian-language scholar who is also a veteran Chekhovian actor.

Without compromising the spirit of the text, Paul Schmidt accurately translates Chekhov's entire theatrical canon, rescuing the humor "lost" in most academic translations while respecting the historical context and original social climate.

Schmidt's translations of Chekhov have been successfully staged all over the U.S. by such theatrical directors as Lee Strasberg, Elizabeth Swados, Peter Sellars and Robert Wilson. Critics have hailed these translations as making Chekhov fully accessible to American audiences. They are also accurate -- Schmidt has been described as "the gold standard in Russian-English translation" by Michael Holquist of the Russian department at Yale University.

Anton Chekhov was born in Taganrog, in southern Russia, and in his youth paid for his own education and supported his entire family by writing short, satirical sketches of Russian life. Though he eventually became a physician and once considered medicine his principal career, he continued to gain popularity and praise as a writer for various Russian newspapers, eventually authoring more literary work and ultimately his most well-known plays, including Ivanov, The Seagull, and Uncle Vanya. He died of tuberculosis in 1904, and is regarded as one of the best short story writers in history, influencing such authors as Ernest Hemingway, Vladimir Nabokov, and Raymond Carver.

Arthur Rimbaud, born in 1854 in Charleville, France, is hailed as the father of Symbolism. His most famous works of poetry include The Drunken Boat and A Season in Hell. He died in 1891.

Paul Schmidt was, in addition to a translator, a playwright, actor, and author of two books of poetry.