The Man Who Loved China: The Fantastic Story of the Eccentric Scientist Who Unlocked the Mysteries of the Middle Kingdom (Paperback) 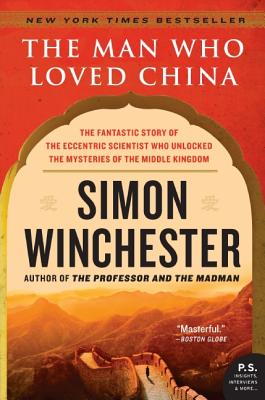 The Man Who Loved China: The Fantastic Story of the Eccentric Scientist Who Unlocked the Mysteries of the Middle Kingdom (Paperback)

In sumptuous and illuminating detail, Simon Winchester, the bestselling author of The Professor and the Madman ("Elegant and scrupulous"—New York Times Book Review) and Krakatoa ("A mesmerizing page-turner"—Time) brings to life the extraordinary story of Joseph Needham, the brilliant Cambridge scientist who unlocked the most closely held secrets of China, long the world's most technologically advanced country.

No cloistered don, this tall, married Englishman was a freethinking intellectual, who practiced nudism and was devoted to a quirky brand of folk dancing. In 1937, while working as a biochemist at Cambridge University, he instantly fell in love with a visiting Chinese student, with whom he began a lifelong affair.

He soon became fascinated with China, and his mistress swiftly persuaded the ever-enthusiastic Needham to travel to her home country, where he embarked on a series of extraordinary expeditions to the farthest frontiers of this ancient empire. He searched everywhere for evidence to bolster his conviction that the Chinese were responsible for hundreds of mankind's most familiar innovations—including printing, the compass, explosives, suspension bridges, even toilet paper—often centuries before the rest of the world. His thrilling and dangerous journeys, vividly recreated by Winchester, took him across war-torn China to far-flung outposts, consolidating his deep admiration for the Chinese people.

After the war, Needham was determined to tell the world what he had discovered, and began writing his majestic Science and Civilisation in China, describing the country's long and astonishing history of invention and technology. By the time he died, he had produced, essentially single-handedly, seventeen immense volumes, marking him as the greatest one-man encyclopedist ever.

Both epic and intimate, The Man Who Loved China tells the sweeping story of China through Needham's remarkable life. Here is an unforgettable tale of what makes men, nations, and, indeed, mankind itself great—related by one of the world's inimitable storytellers.

Simon Winchester is the acclaimed author of many books, including The Professor and the Madman, The Men Who United the States, The Map That Changed the World, The Man Who Loved China, A Crack in the Edge of the World, and Krakatoa, all of which were New York Times bestsellers and appeared on numerous best and notable lists. In 2006, Winchester was made an officer of the Order of the British Empire (OBE) by Her Majesty the Queen. He resides in western Massachusetts.