The Bush Agenda: Invading the World, One Economy at a Time (Paperback) 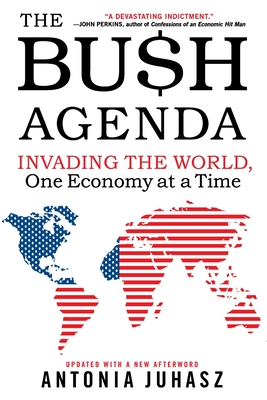 The Bush Agenda: Invading the World, One Economy at a Time (Paperback)

In The Bush Agenda, Antonia Juhasz exposes a radical corporate globalization agenda that has been refined by leading members and allies of the Bush administration over decades and reached its fullest, most aggressive implementation under George W. Bush—and Bush Agenda adherents plan for it to outlast him.

Juhasz uncovers the history and key role of U.S. corporations in the creation of this agenda—focusing on Bechtel, Lockheed Martin, Chevron, and Halliburton—then presents the Iraq War as its most brutal application to date. Expertly revealing the oil timeline driving the war, Juhasz charts exactly how the administration has fundamentally transformed Iraq's economy, locked in sweeping advantages to its corporate allies, and expanded its target to the whole Middle East. The results of these same corporate globalization policies—dislocation, extreme poverty, and increased violence and terrorism—have been demonstrated in regions from South America to Africa to the Middle East and Asia, and in the United States.

Extensively researched and now updated with a new afterword, The Bush Agenda is a brilliant, informative analysis, revealing the hard truths about where the Bush administration and its corporate allies are leading the modern world—and what we can do about it.

Antonia Juhasz is a leading oil industry, international trade, and finance policy expert. She is the author of The Bush Agenda. A frequent media commentator, Juhasz's writing has been featured in the New York Times, International Herald Tribune, and the Los Angeles Times, among other publications. She is a director at Global Exchange in San Francisco, California.