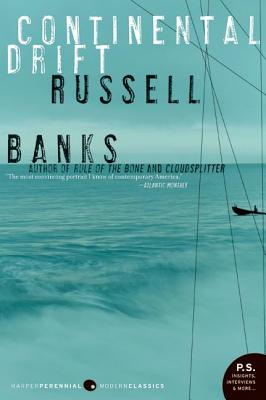 “The most convincing portrait I know of contemporary America . . . a great American novel.” — James Atlas, The Atlantic Monthly

From acclaimed author Russell Banks, a masterful novel of hope lost and gained—a gripping, indelible story of fragile lives uprooted and transformed by injustice, disappointment, and the seductions and realities of the American dream.

Banks's searing tale of uprootedness, migration, and exploitation in contemporary America brings together two of the dominant realms of his fiction—New England and the Caribbean—skillfully braided into one taut narrative. Continental Drift is the story of a young blue-collar worker and family man who abandons his broken dreams in New Hampshire and the story of a young Haitian woman who, with her nephew and baby, flees the brutal injustice and poverty of her homeland.

Continental Drift is a powerful literary classic from one of contemporary fiction's most important writers.

Russell Banks, twice a finalist for the Pulitzer Prize, was one of America’s most prestigious fiction writers, a past president of the International Parliament of Writers, and a member of the American Academy of Arts and Letters. His work has been translated into twenty languages and he received numerous prizes and awards, including the Common Wealth Award for Literature. He died in January 2023 at the age of eighty-two.

“Russell Banks is a writer of extraordinary power.” — Gail Caldwell

"A great American novel...a lesson in history...It is the most convincing portrait I know of contemporary America." — James Atlas, The Atlantic

“An excellent novel...An important novel because of the precise manner in which it reflects the spiritual yearning and materialistic frenzy of our contemporary life. It is also an extremely skillful book, both in its writing, which is impeccable, and in the way it unfolds. . . . Always, Banks writes with tremendous knowledge, convictions, and authenticity.” — Chicago Tribune

“At its deepest level, Continental Drift is about a culture imagining itself. Black, white, New World, Old World, living and dead, animal and mineral, a startling array of voices perform this act of creation. Banks has captured the din, clamor, and chaos of these voices clearly and convincingly.” — John Edgar Wideman

"Russell Banks...explores the themes of good and evil, fate and freedom, success and failure, love and sex, and racism and poverty through alternating chapters focusing of dual protagonists: Bob Dubois, 30, who forsakes his dead-end job as an oil burner repairman in New Hampshire to begin a new life in Florida, and Vanise Dorsinville, a young, illiterate Haitian mother who seeks refuge from poverty by fleeing to America...Original in conception, gripping in execution." — Newsday