The Soul of Baseball: A Road Trip Through Buck O'Neil's America (Paperback) 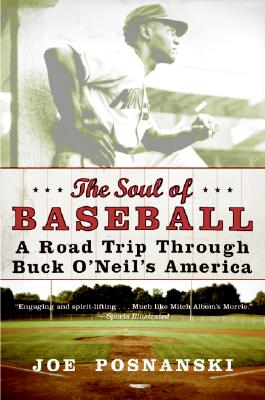 The Soul of Baseball: A Road Trip Through Buck O'Neil's America (Paperback)

From the author of Baseball 100

“A fascinating account of a man who outlasted the ignorance of a nation and persevered to become a beloved figure...One of the best baseball books in years, filled with depth style and clarity." —Cleveland Plain Dealer

When legendary Negro League player Buck O’Neil asked sports columnist Joe Posnanski how he fell in love with baseball, that simple question eventually led the pair on a cross-country quest to recapture the love that first drew them to the game. Baseball & Jazz recounts their emotional quest to find the heart of America’s beloved sport that still beats despite the scandal-ridden, steroid-shooting, money hungry athletes who currently seem to define the sport. At its heart is the story of 94-year-old Buck O’Neil—a man that truly played for the love of the game. After an impressive career in the Negro Baseball Leagues in which he earned two hitting titles and one championship, O’Neil made baseball history by becoming the first African-American coach in major league baseball. Posnanski writes about that love and the one thing that O’Neil cherishes almost as much as baseball: jazz. This heartwarming and insightful journey is an endearing step back in time to the days when the crack of a bat and the smokey notes of a midnight jam session were the sounds that brought the most joy to a man’s heart.

A senior writer at Sports Illustrated, Joe Posnanski has twice been named the Best Sports Columnist in America by the Associated Press Sports Editors for his work at the Kansas City Star. He is the author of The Good Stuff and The Soul of Baseball: A Road Trip Through Buck O'Neil's America, which won the prestigious Casey Award for best baseball book of 2007. His work has also been anthologized in Best American Sports Writing, and he lives with his family in Kansas City, Missouri.

“This book is flat-out terrific...If Gandhi had played baseball, he would have been Buck O’Neill.” — Leigh Montville, author of Big Bam and Ted Williams

“Imagine, a year spent with Buck O’Neil...you don’t have to imagine it, it’s all here.” — Bob Costas

“[A] loving, lyrical effort by Joe Posnanski. One of the most original and winning baseball books in recent years.” — Harvey Frommer