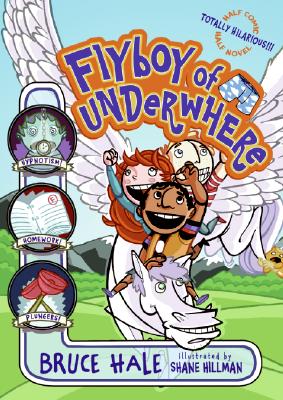 This is book number 3 in the Underwhere series.

Sometimes even sidekicks have to step up.

Here's the thing: Zeke's busy being the so-called Prince of Underwhere. His prissy sister, Stephanie, is some sort of pirate queen. But Hector? Everyone treats him like a joker and a sidekick. Well, those days are over. Now only Hector can save the day—if he can survive the swarms of sharp-beaked midget flying dinos, smart-aleck flying horses, angry armies in their undies, a really, really bad hypnotist, and a duel with deadly toilet plungers. . . all the ordinary wedgie weirdness of the tighty-whitie world under our own.

Bruce Hale has written and/or illustrated over sixty books for kids and is the author of Clark the Shark; Clark the Shark Dares to Share; the award-winning Chet Gecko Mysteries series; Snoring Beauty, one of Oprah’s Recommended Reads for Kids; and the School for S.P.I.E.S. series. In his free time, Bruce enjoys hiking, watching movies, and making music. He lives in Santa Barbara, California, with his wife, dog, and many hats. You can catch him online at www.brucehale.com.

Shane (meowing marvel) Hillman is the illustrator of the Underwhere series as well as the creator of many comic strips on the web and in print. You'll find him ruffling his whiskers and taking many, many baths in Houston, Texas.