Nature's Way: Native Wisdom for Living in Balance with the Earth (Paperback) 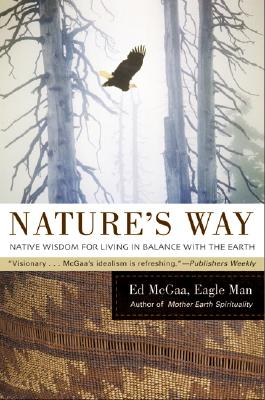 Nature's Way: Native Wisdom for Living in Balance with the Earth (Paperback)

Now in paperback! US bestselling author of Mother Earth Spirituality returns with a call for a spiritual awakening to create a new global culture.

Beginning with the ways of the Lakota Sioux and branching outward, Sioux tribal leader Ed McGaa, known as Eagle Man, shows the error of using animals and the natural world as a whole for economic and political gain. He then offers everyday lessons and values gleaned from Nature that endure for all times and people.

In this call for spiritual awakening, McGaa explains how we can create a new global culture based not on dominance over nature for economic and political gain, but on values that endure for all times and all people. Nature's Way explores Native American belief systems, oppression of Native Americans by the dominant society, the desacralisation of Nature, and the complicity of institutional religion.

Taking on religion, politics, and culture, McGaa provides a template for readers – a path designed by Nature that anyone can follow. Using the lessons of eagle, bear, lion, wolf, orca, owl, tiger, buffalo, rat, deer – even the cottonwood tree, Nature's Way teaches all of us how we can overcome religious intolerance, treat women and men equally, preserve our environment, and live in peace.

Ed McGaa, J.D., was born on the Oglala Sioux reservation in South Dakota and is a registered tribal member. He served in Korea as a Marine Corporal before earning an undergraduate degree at St. John's University in Minnesota. He then rejoined the Marine Corps to become a Phantom F4 fighter pilot in Vietnam, where he flew in more than a hundred combat missions. Upon his return McGaa danced in six annual Sioux Sun Dances. The Sun Dance led him to the seven Mother Earth ceremonies under the tutelage of Chief Eagle Feather and Chief Fools Crow, two Sioux holy men. Eagle Man holds a law degree from the University of South Dakota and is the author of Red Cloud: Biography of an Indian Chief; Mother Earth Spirituality: Healing Ourselves and Our World; Rainbow Tribe: Ordinary People Journeying on the Red Road; Native Wisdom: Perceptions of the Natural Way; and the novel Eagle Vision: Return of the Hoop.

“[McGaa] takes us to a new level of perception of the world around us and within us.” — --Jack Weatherford, Prof. of Anthropology at Macalaster College, author of Indian Givers: How the Indians of the Americas Transformed the World