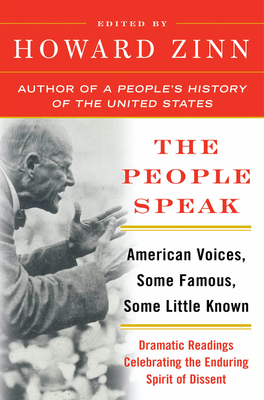 Collected here is a brief history of America told through stories applauding the enduring spirit of dissent.

To celebrate the millionth copy sold of his book A People's History of the United States, Howard Zinn drew on the words of Americans—some famous, some little known—across the range of American history. These words were read by a remarkable cast at an event held at the 92nd Street Y in New York City that included James Earl Jones, Alice Walker, Kurt Vonnegut, Alfre Woodard, Marisa Tomei, Danny Glover, Harris Yulin, Andre Gregory, and others. From that celebration, this book was born.

Here in their own words, and interwoven with commentary by Zinn, are Columbus on the Arawaks; Plough Jogger, a farmer and participant in Shays' Rebellion; Harriet Hanson, a Lowell mill worker; Frederick Douglass; Mark Twain; Mother Jones; Emma Goldman; Helen Keller; Eugene V. Debs; Langston Hughes; Genova Johnson Dollinger on a sit-down strike at General Motors in Flint, Michigan; an interrogation from a 1953 HUAC hearing; Fannie Lou Hamer, a sharecropper and member of the Freedom Democratic Party; Malcolm X; and James Lawrence Harrington, a Gulf War resister, among others.

Howard Zinn (1922–2010) was a historian, playwright, and social activist. In addition to A People’s History of the United States, which has sold more than two million copies, he is the author of numerous books including The People Speak, Passionate Declarations, and the autobiography, You Can’t Be Neutral on a Moving Train.