The Power of Babel: A Natural History of Language (Paperback) 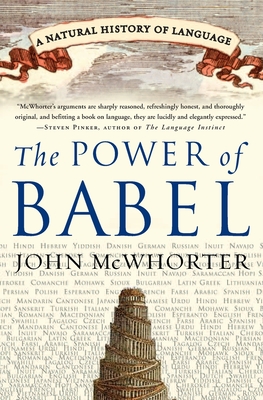 The Power of Babel: A Natural History of Language (Paperback)

“An essay in origins … as theoretical as Hawking and Gorst in trying to see into the deep past. McWhorter is a clear and witty writer.”— Harper’s

In the first book written for the layperson about the natural history of language, linguistic professor John McWhorter ranges across linguistic theory, geography, history, and pop culture to tell the fascinating story of how thousands of very different languages have evolved from a single, original source in a natural process similar to biological evolution.

There are approximately six thousand languages on Earth today, each a descendant of the tongue first spoken by Homo sapiens some 150,000 years ago. While laying out how languages mix and mutate over time, linguistics professor John McWhorter reminds us of the variety within the species that speaks them, and argues that, contrary to popular perception, language is not immutable and hidebound, but a living, dynamic entity that adapts itself to an ever-changing human environment. Full of humor and imaginative insight, The Power of Babel draws its illustrative examples from languages around the world, including pidgins, Creoles, and nonstandard dialects.

John McWhorter teaches linguistics, American Studies and music history at Columbia University. He writes for the New York Times and the Atlantic, hosts the language podcast Lexicon Valley, and has written over 20 books including Nine Nasty Words, Woke Racism, The Power of Babel, and The Language Hoax. He lives in New York City.

“John McWhorter’s The Power of Babel: A Natural History of Language is an essay in origins, and is as theoretical Hawking and Gorst in trying to see into the deep past. McWhorter is a clear and witty writer.” — Harper's Magazine

“McWhorter explains clearly how and why sounds change, how word meanings change…how grammar changes and how they all bifurcate, mix, multiply, grow branches, get elaborated, are dissolved and reconstituted. McWhorter writes lucidly; it’s evident that he’s a teacher.” — San Francisco Chronicle

“McWhorter offers a sweeping survey of people’s movements around the globe and the evolution of languages. Entertaining…and…accessible.” — Science News (Washington, D.C)

“McWhorter has done an admirable job of bridging the gap between the linguists’ view of language and the public’s. A worthy contribution to our understanding of the defining feature of human life.” — Booklist

“McWhorter’s arguments are sharply reasoned, refreshingly honest, and thoroughly original, and befitting a book on language, they are lucidly and elegantly expressed.” — Steven Pinker, author of The Language Instinct