Paradise of the Blind: A Novel (Paperback) 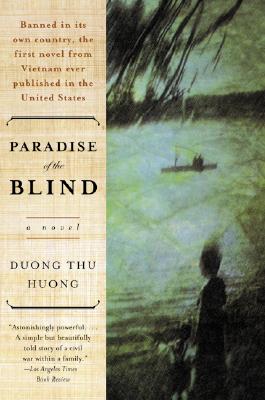 Paradise of the Blind: A Novel (Paperback)

Paradise of the Blind is an exquisite portrait of three Vietnamese women struggling to survive in a society where subservience to men is expected and Communist corruption crushes every dream. Through the eyes of Hang, a young woman in her twenties who has grown up amidst the slums and intermittent beauty of Hanoi, we come to know the tragedy of her family as land reform rips apart their village. When her uncle Chinh‘s political loyalties replace family devotion, Hang is torn between her mother‘s appalling self–sacrifice and the bitterness of her aunt who can avenge but not forgive. Only by freeing herself from the past will Hang be able to find dignity –– and a future.

Duong Thu Huong is one of Vietnam's most popular writers. She was born in 1947, and at twenty volunteered to lead a Communist Youth Brigade sent to the front during the Vietnam War. During Chinas's 1979 attack on Vietnam, she also became the first woman combatant present on the front lines to chronicle the conflict. A vocal advocate of human rights and democratic political reform, Duong Thu Huong was expelled from the Vietnamese Communist party in 1989 and was imprisoned without trial in 1991 for her political beliefs. Paradise of the Blind is her fourth novel and her fourth novel to be effectively banned by the Vietnamese government. She is also the author of Novel Without a Name, which was nominated for the International IMPAC Dublin Literary Award. Duong Thu Huong is not allowed to leave Vietnam. She lives and writes in Hanoi.