The Death of Vishnu (Paperback) 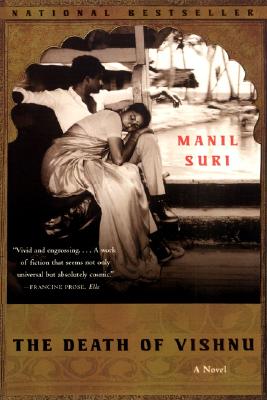 The Death of Vishnu (Paperback)


Special Order—Subject to Availability
Vishnu, the odd-job man in a Bombay apartment block, lies dying on the staircase landing: Around him the lives of the apartment dwellers unfold: the warring housewives on the first floor, lovesick teenagers on the second, and the widower, alone and quietly grieving on the top floor of the building. In a fevered state Vishnu looks back on his love affair with the seductive Padmim and wonders if he might actually be the god Vishnu, guardian of the entire universe.

Blending incisive comedy with Hindu mythology and a dash of Bollywood sparkle, "The Death of Vishnu" is an intimate and compelling view of an unforgettable world.

"[THE DEATH OF VISHNU] reads like the work of a highly skilled and experienced practitioner of the writer's craft."
-The Los Angeles Times Book Review

"Suri, at his best, reveals not only a collision of modern and mythic India but a commingling of them."
-San Fransisco Chronicle

"Marvelously life-embracing . THE DEATH OF VISHNU is a seamlessly constructed, quietly eloquent work of art."
-Newsday

"The reader is swept away by Suri's fresh, witty observations and tender comic moments."
-Seattle Times