Presidential Power and the Modern Presidents: The Politics of Leadership from Roosevelt to Reagan (Paperback) 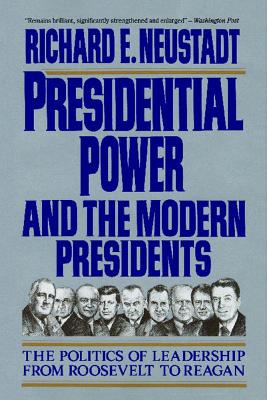 Presidential Power and the Modern Presidents: The Politics of Leadership from Roosevelt to Reagan (Paperback)


Not On Our Shelves—Ships in 1-5 Days
Richard E. Neustadt presents research and analysis on the judgement of presidential leadership and creates a framework of the modern president.

In an effort to identify what America uses to measure the success of a president and his leadership, Presidential Power and the Modern President approaches the president himself by looking directly at his influence on governmental action.

From Roosevelt to Reagan, Neustadt examines presidential success and suggests a theory of presidential power, testing it against the events in the administrations of postwar presidents.
Richard E. Neustadt is Douglas Dillon Professor of Government in the John F. Kennedy School of Government at Harvard University. For three decades an advisor to presidents, their aides, and to members of the cabinet, he is the author of Alliance Politics and the influential study, Presidential Power.
Washington Post Remains brilliant, significantly strengthened and enlarged.

Arthur Schlesinger, Jr. Our most brilliant commentator on the Presidency brings his diagnosis up to date in this witty, inclusive and stylish book.

Aaron Wildavsky University of California, Berkeley Savvy, insightful political portraits of recent presidents, including Ronald Reagan, in relation to what is still the contemporary classic on the Presidency.

Representative Stephen J. Solarz New York An operational Bible for Presidents and their staffs, and an indispensable Baedeker for those who seek to understand both.

Charles O. Jones University of Wisconsin He is so much in command that he doesn't have to tell all. A personal characteristic, a response, an insight -- and soon you see what he sees.

Clark M. Clifford For thirty years, Presidential Power has influenced students of the Presidency -- from the quiet comers of the White House to college and university compuses across the nation.