A Seat At The Table Book Group is here to explore the depth of black women within literature. This group is for anyone and everyone who wants to read the works of black women across genre lines.The group is lead by Morgan Harding with Politics and Prose and now meets online. Participants limited to 20 sign ups. For info to join, please email bookgroups@politics-prose.com 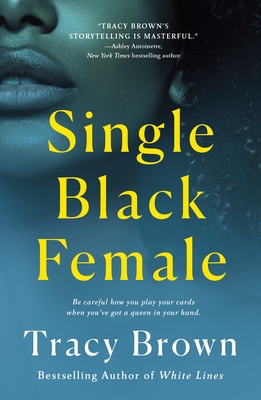 Tracy Brown's Single Black Female is a taut, edgy, deftly spun novel about four friends grappling with the dramatic twists and turns of life, love and what it means to “make it” in America.

Ivy Donovan is a successful stylist, entrepreneur, and single mom who has been loyal to her sons’ father, Michael, who’s serving a lengthy prison sentence. But life has gotten lonely over the years, and Ivy wants more for herself. Michael, however, isn’t about to lose his family.

Coco Norris is well-off, single, childless, and struggling with her allegiance to emotionally unavailable men. When she finds a man who seems like he can give her everything she has ever wanted, Coco soon discovers that she has taken on more than she can possibly handle.

Deja Maddox is a real estate agent who is married to Bobby, a police sergeant with the NYPD. They have assimilated, looking down on anything that doesn’t fit their buttoned-up, polished life. But Deja isn’t as satisfied as she would like everyone to believe. When Deja’s past returns with a vengeance, she’s forced to face herself as her “perfect” life begins to crumble.

Nikki Diamond is a savvy, self-made businesswoman and social media darling who lives large and with no regrets. She’s also Deja’s little sister and thinks her sister can have so much more than her ho-hum marriage. And Nikki is all too happy to lend a “helping” hand to make that happen.

Things come to a head when Ivy’s youngest son, Kingston, is caught up in a polarizing encounter with the NYPD. Everyone must figure out where they stand, including Bobby, who suddenly has to decide if his “blue life” matters more to him than his Black life and the Black lives of those he loves.

Single Black Female highlights the nuances of Black love, the often tested bonds of Black families, what it means to face the world as a Black man and the joy and pain of being a Black woman.

Tracy Brown is the Essence bestselling author of Aftermath, Snapped, Twisted, White Lines and Criminal Minded. Writing has always been her passion, and she finds it an honor to depict for her readers the things she’s seen and heard. She is a native New Yorker, born and raised in Staten Island.

"I dare you to read Tracy Brown’s new novel "Single Black Female". She will snatch you out of your life, pull you into the drama-filled world of multifaceted and enthralling women, facing off with thought-provoking dilemmas that will hold you captive from beginning to end. Loved this book!" - J. D. Mason National Bestselling, Award Winning Author

Splendidly engrossing...filled with ambition, desire, and betrayal. —Publishers Weekly on White Lines III: All Falls Down

Electrifying and seductive. —RT Book Reviews on White Lines III: All Falls Down

Fast and furious. Readers who like delving into complex relationships and characters creeping behind one another's back will be drawn into this story involving five different love liaisons. —Library Journal on Snapped

Brown keeps the drama flowing and the pages turning. —Publisher's Weekly on Twisted

Brown's characters are sympathetically drawn, and the Goodfellas-like take on the gangster life is eye-opening. —Publishers Weekly on White Lines